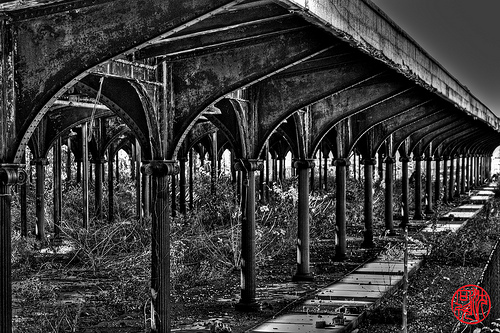 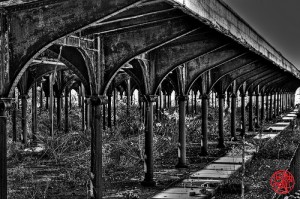 The phone message had been an incomprehensible series of syllables strung together by a mouth that was barely capable of speech. He depressed the save button and considered the circumstances.   Were he to take this somewhere, what would he do with it?  What would it prove?  That she was drunk, stoned, stupid or insane?  Perhaps all of the above.  Perhaps nothing.   Whatever it was there were so many barriers, so many challenges.

His wife rolled over.  “What did she say?” she asked, already slipping off into that otherworld trance that left part of her mind telling the world what she could never honestly say.

“I don’t know,” he offered truthfully, “she seemed to be talking about something to do with money, apartment and someone’s friends.   She didn’t seem all there.”

“She probably wasn’t,” his wife said, then rolled to her other side.

The uneasy tide of stress stole over him and he looked at the far wall.   There had been far too many dark nights, teeth clenched, trying to ignore what he knew to be true.   Now he had made it here, to this little place of peace.  This small island of tranquility and he found he was running harder than he ever had in his life.   His wife…..his wife.

She had drifted off and he was terrified it would happen again; that moment when she spoke terrible truths.   When the veneer of adoration fell off and a persistent resentment would break through.  He couldn’t hate her for these things.   He knew he couldn’t.   Not because it was right.  It wasn’t.   He had never been anything but himself.    He had never pretended to be anything other than the father he was.  Terrified for his children, struggling with the pain the divorce had left.   But he did love her.

“I don’t think you are happy,” she murmured, eyes closed and her breathing in the regular cadence of the sound sleeper.

He clasped his hands to his head.  It was happening again.   If he fled she would wander out and find him on the couch sleeping the only sleep he had in a month and she would require him to atone for his absence by some act or promise he could not enthusiastically undertake knowing what he had heard.

“I am going on some sales calls in a few weeks,” she muttered, spittle running from the corner of her mouth.

Why wouldn’t she just shut up and sleep?

“k?” she said and repositioned herself.

The first time it happened he had just thought she playing.   That she was testing him in the way all couples test.   Until she walked off into the plate glass door and bloodied her nose.  She really hadn’t known where she was or what she was doing. He had sat up and nursed her through the night in a cold terror he had not felt since the night his ex-wife had overdosed on booze, pain killers and sleeping pills.   He had sworn to himself that night he would never be with another addict, ever.  That was the thing though, his wife wasn’t an addict.   Aside from the odd glass of wine she was a straight shooter.  Her diet was macrobiotic, her tastes were cerebral and she was a mental challenge.   But every night she would start to drift.  The comments would have a bite, then she would become docile and then she would be gone, unaware of where she was, making a series of admissions he never wanted to hear.  The worst being that they weren’t salacious.   They weren’t lust or infidelity.  They were more painful.  They were conversations with friends and coworkers she had about him and what was wrong with him.  He lacked passion, enthusiasm, he was too calm, too peaceful.   Yes he was ambitious and he was all about his children, but where was the mad passion?  The night he understood that he was hearing her unfiltered thoughts he had left the bedroom and wept silently on the couch.  There was no time for his despair and no place for his anger.    There were his children to save and that was all there was.    Later that night she had found him and made him come to bed.   Tonight, as she began to speak again he knew he could not take another word.

“Phil told me to remind him to call about the plane,” she snored.

Phil was her sales partner.  The one she would be out on sales calls with for three days away.

He tried to edge off the bed.

“Phil has a buddy down in Fort Myers who owns the Bayside resort, will get us a free room,” she mumbled, grabbing his wrist in her sleep.

Jesus, if they were fucking, than just fuck, leave and let him get on with his life.   But he knew it was not that simple, as he felt her hand gripping tightly on his wrist.

“You be okay with the kids?” she asked, her one eye closed and one rolling about aimlessly.

He had tried to explain to her about this, all of this.  But she never seemed to get it.

“Love you,” she said, her face in a dazed but appreciative smile.

“Love you too,” he agreed and firmly removed her fingers from his wrist.

He decided to risk the living room.   He stared into the darkness hoping for sleep to come.  But instead there were only questions.    Not the needling questions about what she was doing, who she was talking to and what about.   That he could tune out.   It was the question of “when” the shoe would drop?  Was she waiting for him to have his kids?   Was she waiting to screw that up somehow?  Why would she?   But then again, why wouldn’t she?  Hadn’t she promised to help him with the paperwork for the attorney?   Hadn’t she bailed on that?   Didn’t she promise to help him fill out the registration for the camp?   Hadn’t she spaced out on that one as well?   What was she saying to him?  I want you to have your kids and I am there for you.  I will fight for them, but only when it is convenient?

A buzz erupted from nearby.  It was her cellphone.  She had dropped it half open on the corner chair.  It buzzed again and the screen lit up with the message from Phil, “I miss you already!”

The phone had not relocked when she dropped it.   But he couldn’t bring himself to touch it, to look at it.   Instead he circled around and craned his head.  He saw that it had an out arrow from about when he had gone off to take his evening shower.   She had called Phil while he was getting around and the message was a text back about whatever the last thing it was they had said.

He left the phone where it was, now chirping to let its owner know that there was a message waiting for her.   He settled back onto the couch with his own phone.   She had talked about Phil, a lot, and what she had shared were the odd things.   The observations, the habits that intrigued her and the things he noticed about her.

“He noticed the scar on my chin,” she had said, returning from a lunch meeting.

It was the one he had mentioned on their third date and she had told him about the baseball game when she was on the boy’s little league team in sixth grade and was the catcher.  Billy McCoy had charged her down and she had tagged him out at home to win the game, but not before Billy had spiked her in the chin with his cleats.  She hadn’t cried.   Two dates later he asked her to marry him.

He pointed out to her that she was having the same conversations they had when they were dating six month ago.    She had just smiled and agreed.   Then she pointed out that Phil was on a macrobiotic diet and ran every day.    It seemed to escape her that this information was not wanted, useful or reassuring.

“We are fine,” she had murmured as she had drifted off into her somnambulant state.

Who the “we” were in that thought hadn’t occupied much of his time as that was the evening she decided to clean the kitchen in her sleep.   He had just managed to get the carpet solvent away from her as she was preparing to spray the range with it.  She had turned on the range.

With caring hands, hugs, kisses and kind words he had gotten her to go to bed.  He stayed with her for an hour to make sure that she was finally sound asleep.   As he climbed from bed that night, to clean the kitchen and undo the damage, she rolled over to him and said in a clear voice.

“Thing is….he gets me.  You have no idea, really you don’t.   Someone who gets me,” and then she was snoring.

It meant that his wife needed friends, which probably was healthy.   That she liked to be understood.   That she wasn’t dead and could appreciate other people and liked to be appreciated by them.   So why, then, did these nightly confessional conversations that he was trying so hard to avoid devastate him?  It was a question that he tried to leave and bury in a thousand little daily routines.

Her phone erupted again.  This time he didn’t look at it.  The message could be anything from “I can’t wait to fuck you at the hotel” to “Here are the quarterly sales projections I promised,” and it would not matter.  At this point they were all the same to him; noise that was insinuating its way into his peace, helping him to lose more sleep.   Her phone was now chirping.

Then his phone sang out with the ringtone that was his ex-wife.  He hit the button to silence the ringing.  The phone became still.   He breathed in the silence.   Then the phone informed him he had more messages.

No portion of this maybe reprinted, redistributed or otherwise republished for sale without written permission of Jose Pasqual and/or Hell Bent Press.

The author authorizes linking, emailing, electronic distribution of this article, if the following three criteria are fully met.  1) The article is republished in its entirety, including this authorization and copyright statement below, with full attribution as presented on this site 2) the readers or recipients must have granted the sender permission to send material, articles or communications to them. 3) All hyperlinks contained in this article remain active and functioning  when the article is distributed.

Notwithstanding the granting of the authorization of non-commercial distribution, the Author and Hell Bent Press retains all copyrights, commercial publication rights, print and electronic, for this article.

NOTE: Images are the property of the parties to whom they are attributed and their use for non-commercial use for this posting does not indicate any involvement in or support of the text being provided free of charge.